There was an error retrieving images from Instagram. An attempt will be remade in a few minutes.

Problems? Don’t talk to me about problems…

Went to pre-book our seats online for MAMMA MIA Here We Go Again in GOLD CLASS at the local cinema. We rarely go to the movies, usually wait for the Blu-ray or Netflix options.  We had two gift cards that we have struggled to use, so hard to find a movie we will both love.

Found two perfect seats for the Tuesday session. Was disappointed to see that the “Cheap-arse Tuesday” sessions are only $32 not $42… we won’t get the full value of the gift cards. Then the damn online booking system said the gift cards were invalid… AND they want to charge a $7 booking fee… to book it ONLINE where it costs them NOTHING! OMG!

So I had to take the damn 5-minute drive to the Pacific Werribee shopping centre to pre-book the tickets in person. Then I couldn’t find a car park space close to the cinema and had to walk in the cold for a few 100 metres to get to the entrance… at least I had my hoodie to cover my head.

I was concerned I may have had to wait because it was the busy time, but a staff member came up to the desk right away and served me. We looked for seats on the Tuesday, but she could only see ones along the side, not in the middle like I prefer, so decided to try Thursday instead. The Gold Class cinemas have 8 seats across and six rows of seats but I like to be somewhere in the middle four seats. After a bit of umming and eerring I decided to compromise and go for two side seats on the Tuesday.

When she went to select the seats for me, she discovered that the two seats I originally wanted on the Tuesday were actually available, the ones I tried to book online. So I booked them. There was no booking fee either! Just think how much it cost them for her to do that booking compared to me booking online which cost them nothing.

GOODBYE, CHRISTOPHER ROBIN is a beautiful, powerful, emotionally stirring movie.  This movie is about the evil and senseless trauma of war, also about unintentional emotional child abuse which most of us suffer; one way or another.

On the surface, it’s the story of Christopher Robin Milne, his father AA Milne, and the creation of Winnie The Pooh… then the personal agonies that they faced as it spread to become a success across the entire world.

Not having ever read or heard the stories but aware of them from cultural legend, I was only aware that AA Milne named the boy in the books after his son and the boy’s toys, I knew nothing else about their story.  That “not knowing” made the movie so much more powerful and that was also the audience that the script was crafted to impact the most.

This movie made me realise, after 55 years, that I never had bedtime stories read to me as a child.  I now feel deprived!  I also realised I never read them myself either.  However, that never stopped me from eventually becoming the avid reader and writer that I now am.  It was destined to happen, regardless of the choices of those around me, particularly during my own rough childhood.

There is even a scene that has a view I would describe as perfection… I could look at that view forever and be at peace. 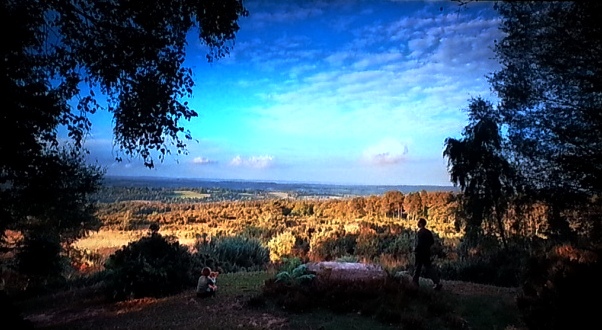 With a free ticket to the local cinema about to expire, I found the only currently showing title of any interest to me was VICTORIA & ABDUL.  I knew nothing about the movie other than the adds and my enjoyment of the TV series Victoria.  I am so thankful I chose this movie.

The story is so beautifully crafted, the script played my emotions like a symphony through many waves of laughter, anger and tears.  I was not alone with my tears as it seemed everyone in the cinema was moved by this gem of a movie … except for the old fool near me who was snoring during the most important part of the dialogue and his wife’s phone rang then as well … some people just have no dignity or consideration!

Dame Judi Dench and Ali Fazal were mesmerising.  Stephen Frears’ direction is faultless.  The other cast were amazing and included the final performance by the now late Tim Pigott-Smith who I first saw in the 1976 Doctor Who episodes The Masque Of Mandragora.

I loved this movie and I loved how it moved me.

DOCTOR WHO: MASQUE OF MANDRAGORA

We know the basic story from the news back in 2009 but this is the real people and the drama that made an experienced but humble pilot into an international hero.  With Tom Hanks in the lead role and Clint Eastwood directing it was bound to be a quality movie.  More than that, SULLY is an engaging and tense drama that made me angry at the ‘establishment’ for trying to ‘blame’ him for actually saving everyone’s life and doing what was previously impossible.

Not GREAT At All

After all the hype for this movie at the cinema I thought this would be a good night’s entertainment.

The CGI and costumes were excellent but it lacked the most important, basic element … a compelling or even interesting story.  This crap should never have been made and the money better spent on feeding the poor or housing the homeless.  Sometimes Hollywood can have its head so far up its own ass that it is just an embarrassment.  No movie deserves to get even to production stage without a powerful, compelling, engaging script.

We gave up 30 minutes into it and I’m going to throw it in the bin, doesn’t deserve to be in my library.  Thank god I only paid $8 for it on special.

Stupid choice to do Matt Damon, not even you could save this wreck.